Our 2021 policy recommendations can help put New York City on the path to effectively ending homelessness among survivors. 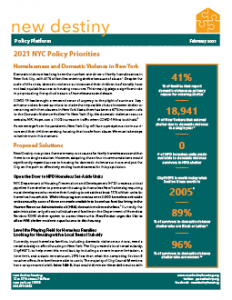 Our advocacy, often in collaboration with other organizations, has resulted in changes to regulations and additional resources for both domestic violence survivors in the homeless shelter system and those at-risk of becoming homeless.

Ten years later, permanent housing remains the most critical unmet need of homeless domestic violence survivors; and family homelessness now accounts for 70% of the individuals in shelter, including over 23,000 children each night.

In 2016 New Destiny, Enterprise Community Partners and Citizen’s Committee for Children co-convened the Family Homelessness Task Force, a group of 40 organizations– service and shelter providers, advocacy and legal services organizations, and housing providers– to focus on the issue of homeless families with children and to begin sourcing ideas for addressing the problem.

In June, 2017 the Task Force held a summit and released a report with recommendations intended to help prevent homelessness, improve the well-being of families and children using homeless shelters, and increase the permanent housing options and post-shelter services for homeless families. The co-conveners have established the Family Homelessness Coalition which advocates for policies and resources that prioritize homeless families with children on the City’s homelessness agenda.